Great Grandmother, 100, sends thanks for 400 birthday cards from around the world – including one from Her Majesty

Home Great Grandmother, 100, sends thanks for 400 birthday cards from around the world – including one from Her Majesty 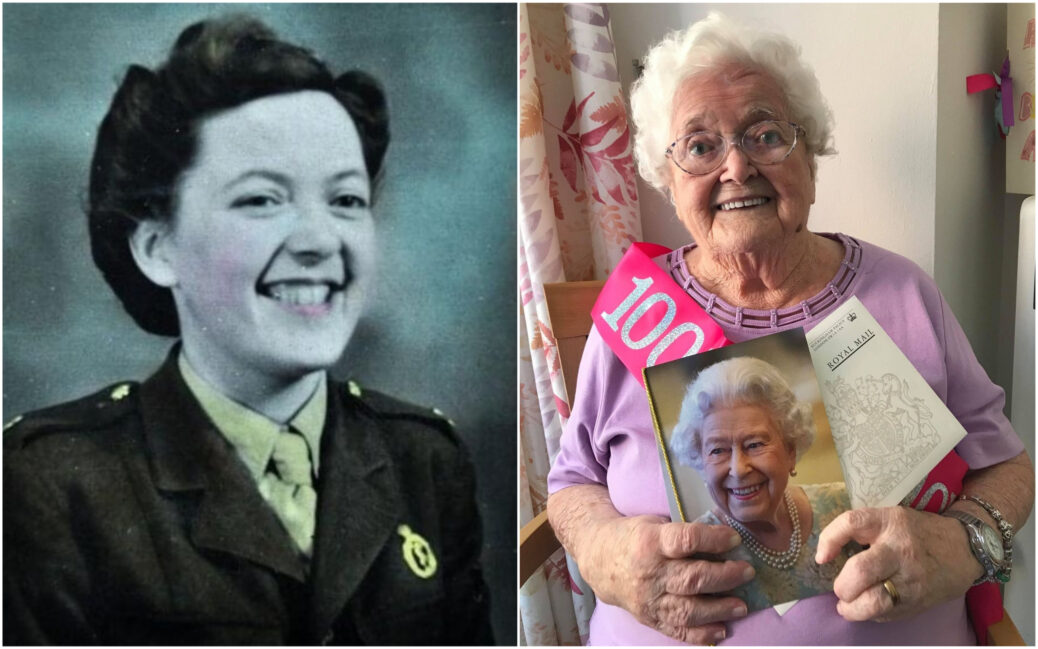 A Southport Great Grandmother who served her country during World War Two has been showered with kindness as she celebrated her 100 birthday today.

Agnes Kelly received over 400 birthday cards, plus balloons and flowers after her family launched an appeal through Stand Up For Southport earlier this month asking for people to send her 100 cards for her 100th birthday.

Among her cards of course was a very special 100th birthday card, from Her Majesty Queen Elizabeth II.

Her daughter, Margaret McMullin, said: “What a morning my centenarian has had!

“She has received 400 plus cards so far.

“I would like to say a special thanks to Year 5 at Aintree Davenhill Primary School; Halsall St Cuthbert’s Church of England Primary School; Hazeldene Day Nursery; Jabella Events; Morrisons supermarket in Southport; and the Co-Op for their thoughtfulness. 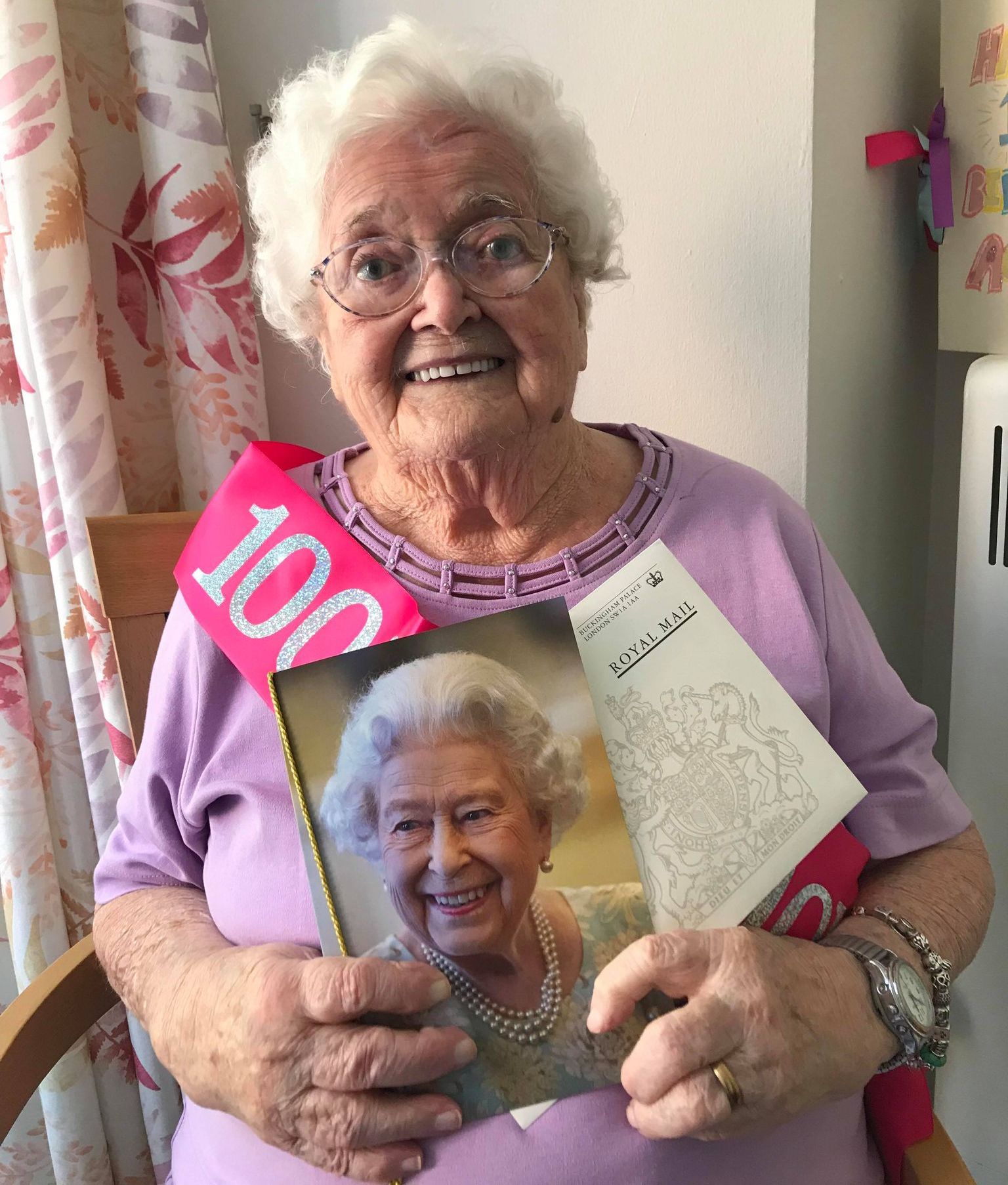 Agnes Kelly has celebrated her 100th birthday in Southport

“But most of all I would like to say a huge thank you to all who sent a card or a letter, from near and far, including New Zealand, Australia, Switzerland, Gibraltar, the Isle of Man, Kenya, USA, Canada and elsewhere.

“It was most appreciated, and it restores my faith in humanity.

“The kindness of strangers indeed.

“Agnes sends her love to you all. Stay safe.”

Agnes Kelly’s granddaughter, Amy Crawford, said: “She has had a fantastic day and has received over 400 cards (and counting!)

“We celebrated at the Rose Tea Room in Birkdale this afternoon and they provided a bottle of Prosecco and cake complimentary. Jo Bella Events sent personalised balloons. Morrisons and Co-Op both delivered cakes and Happy Days Entertainment are going to perform in the garden at Connell Court this weekend. We are truly grateful!” 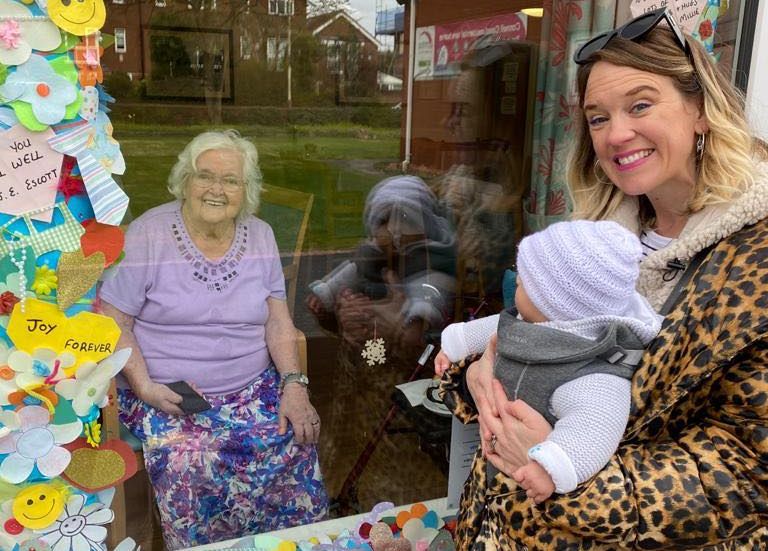 Baby Agnes, and her Mum Lucy, paying a window visit to her great grandmother Agnes Kelly at Connell Court in Southport

It has been a tough time for her, not being able to see her family as much as she would like during lockdown.

Her daughter, Margaret McMullin, said: “Mum was born in Liverpool and was the eldest of four. Sadly, she is the only surviving sibling.

“She left school at 14 and worked in a variety of places, the main one being Freeman’s, on Wavertree Road, Edge Hill.

“During World War Two she was a teleprinter in the ATS. 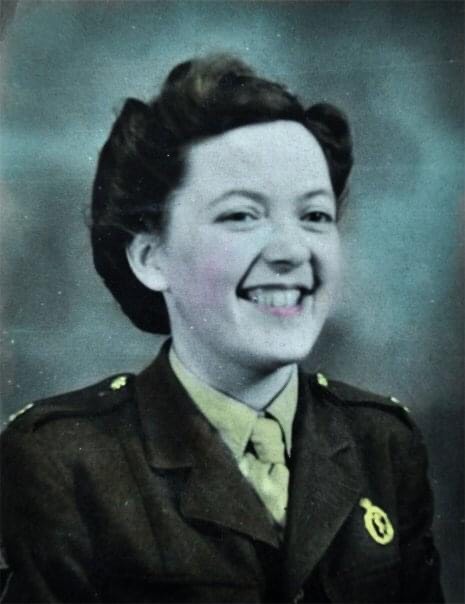 Agnes Kelly in her ATS uniform

“Her postings were far and wide, including Bournemouth, Howarth, Chester and finally the Cotton Exchange in Liverpool.

“Mum met my Dad, Edward Kelly, at a tea dance at St Dunstan’s in Liverpool.

“Agnes and Edward Kelly celebrated their wedding day on 23rd March 1945. Everything was rationed. Mum used a borrowed dress and a cardboard cake, with only one layer real due to egg shortages!

“The wedding reception was in her parents’ house. The piano in the lobby was played by Edward’s brother, Harry.

“Dad as Scottish but they lived in Liverpool before moving to Ainsdale in Southport 35 years  ago. They were happily married for 63 years before Dad died in 2012. 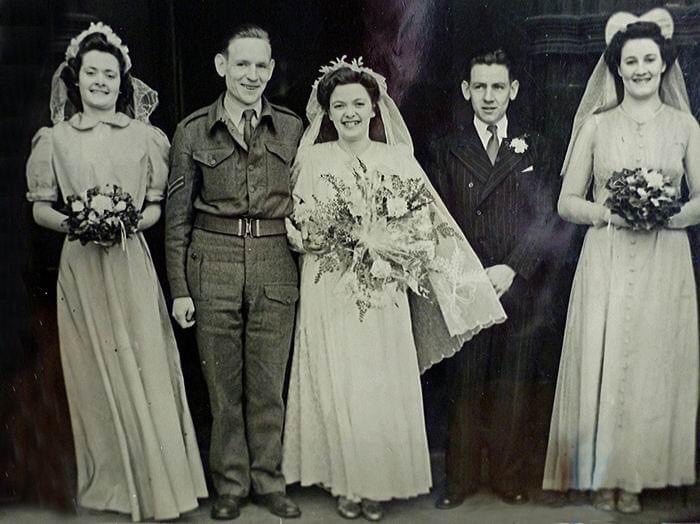 Agnes and Edward Kelly on their wedding day on 23rd March 1945. Everything was rationed. Agnes used a borrowed dress and a cardboard cake, with only one layer real due to egg shortages. The wedding reception was in her parents’ house. The piano in the lobby was played by Edward’s brother, Harry.

“Little Agnes lives in London, little Edward (Teddy) is in Ainsdale. Covid restrictions mean she hasn’t been able to give them a cuddle yet!

“Mum loves to do quizzes and her general knowledge is amazing. When her sight was good she cracked cryptic crosswords in no time at all. 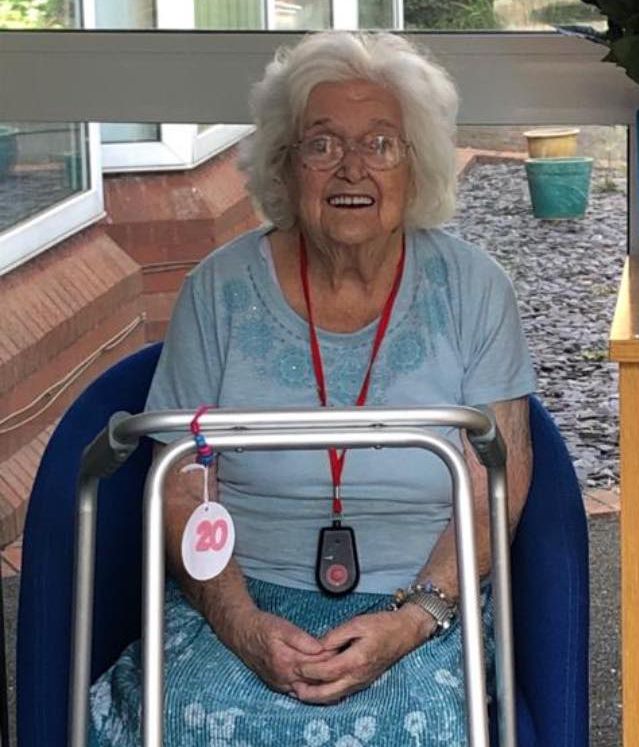 Agnes Kelly, from Southport, is looking forward to celebrating her 100th birthday

“We asked for cards to be sent to make the day special as due to Covid we aren’t allowed to celebrate in any great numbers.

“Her care home, Connell Court on Weld Road in Birkdale, has been fantastic and kept everyone safe during the pandemic.”