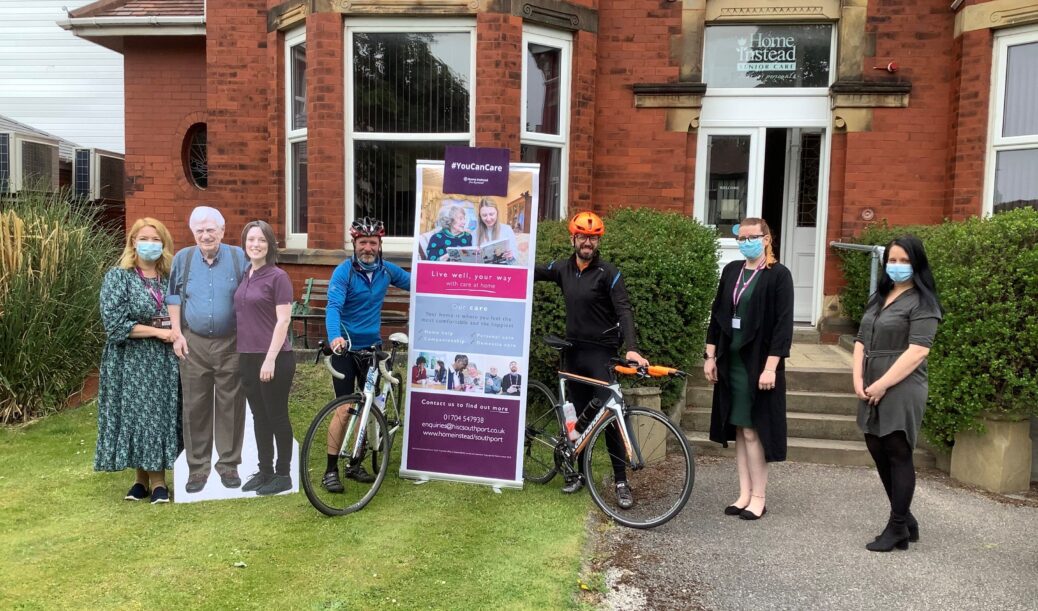 Dan Horton recently took on a mammoth 238-mile bike ride across the North West to raise funds for Home Instead Charities, and popped by the Home Instead Southport and Formby branch en route for a well-earned pitstop.

Throughout the pandemic, Dan’s love of cycling helped him not only physically, but mentally too. The senior analyst for Home Instead, a home care company whose national office is based in Warrington, came up with the idea to utilise his love of cycling to help others, by raising funds for the charity that’s dedicated to supporting community groups for older people across the UK.

Over two days, Dan cycled a mile for each of the Home Instead franchise offices across the UK, bringing his total of miles to 238.

En route, he popped by a handful of Home Instead North West offices for some well-earned minutes’ rest, and to thank them for sponsoring the ride.

Day two for Dan consisted of 133 miles, with a pitstop to see the team at Home Instead on Scarisbrick New Road in Southport.

Anthea Pilkington, co-owner of Home Instead Southport, said: “The team were delighted to see Dan during day two of his huge journey to fundraise for Home Instead Charities – a charity that is very close to our hearts.

“Dan raising just shy of £2,000 for the charity means they can carry on supporting community groups all over the UK with grants to fund activities that support well-being, or programmes to reduce and/or prevent isolation and loneliness. Well done Dan!”

Dan commented on his wonderful achievement: “Cycling provided me with a great way of coping during lockdown.

“I was looking for a challenge and thought a charity ride for Home Instead Charities would be perfect.

“As It’s a cause that’s close to my heart, it’s a fantastic feeling that the money I have raised will be used for several grants.

“This wouldn’t have been possible without the fantastic support from Alicen and Penny from Home Instead Charities, Home Instead and family and friends. I feel very humbled.”

To find out more about Home Instead Charities and how to apply for a grant, please call 01925 730 273 or visit https://www.homeinstead.co.uk/charities/.