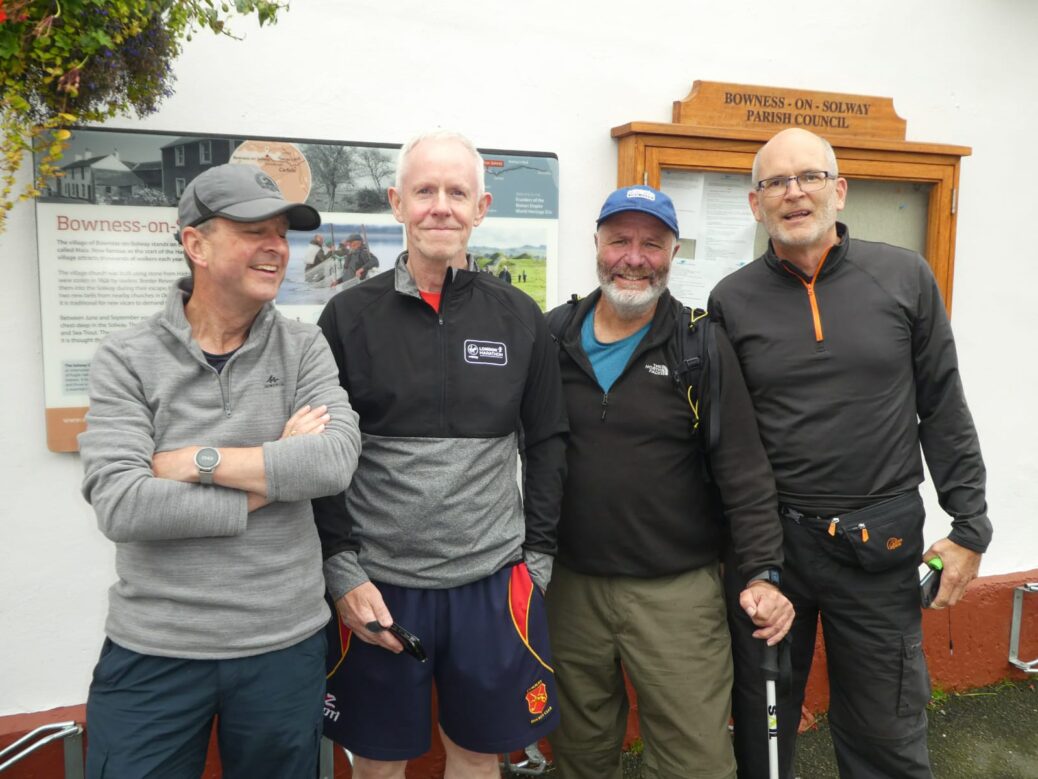 Four friends have completed a gruelling 80-mile coast-to-coast walk across northern England to raise money for a wildlife charity.

Donald Gordon, Phil Morrison, Mike Cooke and David Seymour set off from Bowness-on-Solway in Cumbria on Sunday (September 13), following the Hadrian’s Wall trail all the way to Wallsend in Tyne and Wear, arriving the following Sunday (September 20).

Donald, 61, who lives in Formby but is originally from Toronto, Canada, said they were enjoying the sights. “While the beginning of the walk was typified by walking along river banks and low pasturelands, the middle section had plenty of ups and downs, none more dramatic than the high walks of Walltown and Winshields crags. The border area of Northumberland also boasts Vindolanda, a Roman fort and town where tablets describing daily life have been discovered and represent an important national treasure,” he said.

“We arrived in Segedunum at Wallsend which is the most easterly point of the wall. We thank everyone for their generosity with their donations.”

Accompanying Donald was his brother David, from Felixstowe, Mike, from Hillside in Southport and Phil, who lives in Crosby.

Donald said: “To date, the Coastbusters have raised £1,400 and are very appreciative of everyone’s support! Team spirits remained high throughout the walk.”

Donald, who volunteers for The Lancashire Wildlife Trust locally, said prior to the walk: “The Lancashire Wildlife Trust are a smaller charity that is local to us and we like the work they do. Covid 19 has posed some serious challenges for the charity so we wanted to do our bit to help. These donations will ensure that their vital education and conservation work with rare species of plants and animals and habitats may continue.”

The Lancashire Wildlife Trust, started in 1962, is dedicated to conserving rare and unique species of plants and animals, managing important ecosystems such as sand dunes along the west coast of the UK and in bringing people closer to nature through innovative programs of education, outreach and involvement – collectively, these programs contribute to conservation efforts as well as promoting the health and well-being of people visiting and living in the area. As a charitable organisation, funding for the Trust has been seriously impacted by Covid-19.

The Lancashire Wildlife Trust works in partnership with schools, colleges and universities, with hundreds of farmers and landowners, fishermen and divers; with thousands of companies; with community groups and other environmental organisations; with lotteries, charitable trusts and foundations;  with politicians from across the political spectrum; with local and national governments;  and more.

Sefton Central MP Bill Esterson said: “They couldn’t have picked a better week for it, with the lovely weather we’ve been enjoying. Well done to the team for taking on this huge challenge and raising money for such an important local charity. Charities in particular have suffered greatly due to the coronavirus pandemic for various reasons and I urge people to support this fundraising effort if they can for the Lancashire Wildlife Trust.”